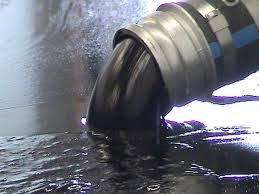 Bitumen is black material which is consumed from 4000 years B.C. its previous Latin name was PIXTU-MEN and today Bitumen and Asphalt are used as its name. its main usage is in roads and streets asphalt and insulation. One of the types of bitumen which is used more is refined bitumen produced in refineries. Also a kind of tar is produced from coal. There are natural bitumen mines in nature which need to be refined.
Bitumen is divided into two main groups in usage: paving grade and roofing grade.Chemically bitumen components are divided into two groups of Hydrocarbure, Asphaltine, and Maltin.
There is 5-30% Asphaltin in bitumen which causes the hardness of the bitumen. Maltin is made of grease and resin.


Bitumen is divided into two main groups in usage:
About 90% of the produced bitumen is used in road construction activities and 10% of it is used for insulation applications.
The main part of bitumen is used in the road construction activities and by the municipalities for coating the streets.
Road construction bitumen is usually classified according to its penetration. The penetration rate of bitumen material represents its strength and hardness which is defined as the number of penetration unit (one tenth millimeter) of one vertical standard needle in one bitumen sample, in certain time and weight on the needle and temperature.
The penetration rate of bitumen is usually measured 25 degree centigrade with 100 gram weight and in 5 seconds. Road construction bitumens made in Iran are “60 to 70” and ’85 to 100”. The numbers represent the range of bitumen penetration rate.
Bitumen is hydrocarbon substance which is black to dark brown and quite solvable in carbon sulfur. It is solid in normal environment temperature but in increased temperature it first becomes paste and then liquid. It has two important properties, impenetrable against water and adhesiveness which makes it an important material for application.


The bitumen types regarding its generation source bitumen can be classified into three categories:

are a class of bitumen which have been naturally produced due to climate conditions in the course of time, and are used without the need to be processed in distillation ways; they are very varied regarding their composition and properties.

are hard black substances which are formed as the result of coal tar distillation. Their new broken surface is shiny and when they are heated they, along with a fast decrease in viscosity, melt, and their melting point depends on the production process.

are the bitumen which is derived from petroleum. These are solid and semi-solid bitumen which is directly produced through distillation from petroleum or by additional operations such as air blowing. Compared with the other types, they are more commonly used and have more applications.
All Types of Petroleum Asphalts, (Petroleum Bitumen), regarding application as Blow:

Graded Bitumen is classified by the depth to which a standard needle will penetrate under specified test conditions. This “pen” test classification is used to indicate the hardness of bitumen, lower penetration indicating a harder bitumen. Specifications for penetration graded bitumens normally state the penetration range for a grade, e.g. 50/70. Other tests are used to classify the bitumen for specification purposes, such as softening point, solubility, flash point etc.


Passing air through bitumen at elevated temperature can be used to alter its physical properties for certain commercial applications. The degree of oxidation can range from very small, often referred to as air-rectification, or semi-blowing, which only slightly modifies the bitumen properties, through to “full” blowing, whereby the properties of the bitumen are significantly different to penetration grade bitumen. Nomenclature and grading for the oxidized bitumen products are based on a combination of the temperature at which the bitumen reaches certain “softness” when being heated up as expressed by the ring and ball softening point test, and the penetration value. Eurobitume has published a paper clarifying the criteria used to differentiate between air-rectified bitumen and oxidized bitumen.


Polymer modified bitumen (PMB) are mixtures produced from: bitumen polymers in which the polymers change the visco-elastic behavior of the bitumen and thus make this binder more suitable for different stresses. The most commonly used polymer for bitumen modification is styrene–butadiene–styrene (SBS) followed by other polymers such as styrene–butadiene–rubber (SBR), ethylene-vinyl-acetate (EVA), and polyethylene. SBS block copolymers are classified as elastomers that increase the elasticity of bitumen. Although polymer modified bitumen costs higher than pure bitumen, they are considered to be more economical because of economic benefits of lower costs of road repairs.


Cutback bitumen are bitumen preparation where the viscosity of the binder has been reduced by addition of a volatile solvent, normally derived form petroleum. Typically the solvents used are white spirit and kerosene. Cutback products are typically used for spaying and some mixing applications.

Bitumen emulsions are products in which tiny droplets (the dispersed phase) of bitumen or bituminous binder are dispersed in an aqueous medium (the continuous phase). The Bitumen particle charge can be positive (cationic), negative (anionic), or uncharged (non-ionic) depending on the emulsifier employed. The binder can be either a bitumen, cutback, or modified bitumen. bitumen emulsions are used largely in road surfacing applications, such as surface dressing, cold mixtures and slurry seals.