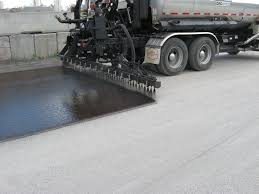 bitumen is used in the temperature range 140 to 230°C at a viscosity of around 200 cSt (20 Pa.$). For many applications, these conditions are both essential and desirable allowing rapid throughput from hot bulk bitumen delivery through to final use without any reheating. There are limitations to the coating film thickness that can be achieved using hot-applied techniques and for some applications, it is necessary to apply at a lower temperature and/or viscosity. The reasons may be a combination of the process requirements, the application techniques, safety and environmental requirements or final product properties. The two methods used mostly to modify bitumen properties are emulsification with water and dilution with hydrocarbon solvent enabling the bitumen to be applied cold, up to about 80°C for emulsions or up to about 150°C for cutbacks, depending on the dilution and solvent used.
Bitumen emulsion is heterogeneous, two-phase systems consisting of two immiscible liquids, bitumen and water, stabilized by a third component, the emulsifier. The bitumen is dispersed throughout the continuous aqueous phase in the form of discrete droplets, typically 0.5 to 5 microns in diameter, which are held in suspension by electrostatic charges.

Bitumen emulsions can be divided into three classes of which the first two, in volume terms, is by far the most important:

Chemical surface-active agents, which serve as emulsifiers, are classified by the electrochemical charge that is attained when they dissociate in a water solution.
In the case of anionic emulsions, the chemical charge is negative.
The chemical type and quantity of surface-active agent used in the manufacturing process govern the process in which the resulting asphalt emulsion can be used.

The term anionic bitumen emulsion is derived from the migration of particles of bitumen under an electric field. The droplets migrate toward the anode (positive electrode), and hence the emulsion is called anionic. In an anionic emulsion, there are “billions and billions” of bitumen droplets with the emulsifying agent at the water bitumen interface. The tail portion of the emulsifying agent aligns itself in the bitumen while the positive portion of the head floats around in the water leaving the rest of the head negatively charged and at the surface of the droplet. This imparts a negative charge to all the droplets. Since negatives repel each other, all the droplets repel each other and remain as distinct bitumen drops in suspension. A typical anionic emulsifying agent is shown below along with a diagram showing the orientation of the agent at the bitumen-water interface and the negative charge imparted to each drop.


A stable dispersion of bitumen in water in the continuous phase. The bitumen globules are positively charged due to the NH3 + group cover which is formed around bitumen droplets and provide stability for emulsion by electrostatic repulsion. These bitumen droplets have an affinity with the negatively charged aggregate, which is usually available in India. Dispersion is obtained by processing bitumen & water-based solution under controlled conditions through a colloidal mill having a high-speed rotor in the presence of scientifically selected surfactants/emulsifier. Selection of emulsifier & its quality is significant for emulsion stability, it's breaking & curing when applied over aggregates. The Cationic Bitumen Emulsion is chocolate brown and free-flowing at normal temperature. Once it breaks the bitumen breaks out and color changes to black. An Emulsion is said to break when the organic and the aqueous phase separate into two distinct layers i.e. the dispersion ceases to exist.

Emulsions are classified as:


The breaking time varies according to the designation of Emulsion although being largely dependent upon the climatic condition i.e. temperature, humidity, wind velocity etc.

The term cationic is derived from the migration of particles of bitumen under an electric field also. The droplets migrate toward the cathode (negative electrode), and hence the emulsion is called cationic. The cationic emulsifying agent functions similarly to the anionic; the negative portion of the head floats around in the water leaving a positively charged head. This imparts a positive charge to all the droplets. Since positives repel each other, all the droplets repel each other and remain as distinct bitumen drops in suspension. A typical cationic emulsifying agent is shown below showing the orientation of the agent at the bitumen-water interface and the positive charge imparted to each drop.


Cationic type: In which the bitumen particles are positively charged and the emulsifier used is a long chain amine. These are suitable for use with siliceous aggregates like quartzite, sandstone, granite etc.
When the emulsion is being produced the cations are adsorbed by bitumen droplets, negatively ions remain in the water. The undeniably most complete field of use is represented by the rapid setting emulsions.The choice of bitumen emulsion (i.e. whether anionic or cationic) to be used depends upon the mineral composition of aggregate used for construction. In the case of silica-rich aggregates, the surface of the aggregates is electronegatively charged. Therefore a cationic bitumen emulsion should be used. This will help better spreading and binding of bitumen with aggregates.

Applicable in humid climates.
No need for chemical solvents.
No risk of environmental contamination
No need for the heating process when operating.
Extensive application in road construction and maintenance.
No risk of fire during storage, transportation, and implementation
Preserved, smoother pavements reduce vehicle repair and fuel needs.
Emulsions are ideal for remote locations where there are no hot mix plants.
Bitumen emulsion applications produce no or minimal hydrocarbon emissions.
Emulsions are ideal for non-attainment areas where fume emissions are limited.
Bitumen emulsions readily coat damp aggregate surfaces, reducing the fuel required for drying aggregates.
Used at ambient temperatures, emulsions require no added heat for most applications and produce minimal fumes.
Pavement preservation applications greatly reduce needs for raw materials and energy for corrective maintenance and reconstruction.
Emulsification requires no petroleum solvents. (Some mixing grade emulsions may have small amounts of solvent to enhance mixing qualities.)
Another application of bitumen emulsion is stabilization of the shifting sands and mulching which are effective for the desert and western area of the country suffering the risk of exposure to dust.